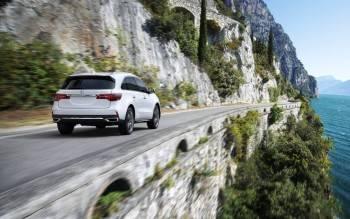 If you’re in the market for a three-row SUV, but don’t want to sacrifice handling, fuel economy, or luxury, then you’re in luck! The 2017 Acura MDX Sport Hybrid is now available at Chicagoland Acura Dealers locations near you, and it’s been equipped with everything a driver could desire! Sport Hybrid technology was initially developed for performance sedans and supercars, and this is the first time that the engineers at Acura have included the technology in a full-size SUV. Their efforts have paid off! We agree with one reviewer at Autotrader.com, who writes, “The MDX Sport Hybrid brings all the safety and comfort of the nonhybrid MDX and then adds a bit more sizzle to the mix with a clever 3-electric-motor setup . . . without sacrificing anything in the way of interior space.” Find out what else the MDX Sport Hybrid is offering by reading on!

Almost everyone is familiar with the Acura MDX’s strong points, and drivers who opt for the Sport Hybrid model will enjoy all of the luxurious comfort and convenience features that they’ve come to expect from Acura. However, SUV drivers may not know what to expect from its new Sport Hybrid drivetrain. Rest assured, the MDX Sport Hybrid lacks for nothing. Together, its 3.0L, 24-valve, SOHC V6 gas engine and its three electric motors produce a total system output of 321 hp and 289-lb-ft of torque. This new drivetrain configuration also improves the MDX’s Super-Handling All-Wheel Drive system, which improves traction and control by sending electric power right where you need it most. Other notable elements unique to the MDX Sport Hybrid trim include a 7-speed dual-clutch transmission as well as programmed fuel injection. Sport Hybrid models also offer major gains in gas mileage relative to non-hybrid builds. The MDX Sport Hybrid gets an EPA-estimated 26 mpg in the city and 27 mpg on the highway.*

Take the MDX Sport Hybrid for a Test Drive!

There’s no other SUV like the 2017 Acura MDX Sport Hybrid! Drivers who take the time to explore our current offers and finance options will quickly discover that Sport Hybrid models are hardly more expensive than their gas-burning competitors, and that the former provide incredible experiential and economic advantages when compared to the latter. Find your local Chicagoland Acura Dealer and take the MDX Sport Hybrid for a test drive!

*Based on 2017 EPA mileage ratings. Use for comparison purposes only. Your actual mileage will vary, depending on how you drive and maintain your vehicle, driving conditions, battery pack age/condition (hybrid only) and other factors.

0 comment(s) so far on The 2017 Acura MDX Sport Hybrid Has Finally Arrived!