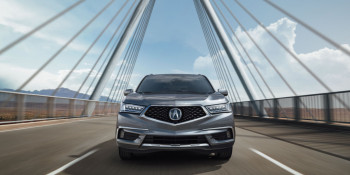 When a popular model like the Acura MDX gets an update for the new model year, drivers sit up and take notice. We’ve compared the 2017 Acura MDX vs. the 2016 Acura MDX to show consumers what’s new onboard this popular luxury crossover SUV. Take a look—then visit the team at your nearest Chicagoland Acura Dealers location to take one of these high-end vehicles out on the road for a test drive!

Of the changes that have occurred for the Acura MDX between the 2016 model year and the 2017 model year, one of the most significant updates is that driver-assist technologies previously only available with the AcuraWatch Package are now standard issue across the MDX lineup. These technologies include features like a Collision Mitigation Braking System, a Lane Keeping Assist System, Road Departure Mitigation, and Adaptive Cruise Control with Low-Speed Follow.

The 2017 MDX has experienced a slight uptick in price, which is to be expected in transitioning to a new model year. Pricing for the 2017 model is $44,050 MSRP.*

Passenger volume grows slightly by 0.4 cubic foot, and the MDX’s exterior length has grown by 2.6 inches while its exterior height has decreased by 0.2 inch.

Perform Your Own In-Person Comparison

If you’d like to check out the 2017 Acura MDX’s updates for yourself and compare the offerings of the new models to the 2016 editions, the expert team members at your nearest Chicagoland Acura Dealers location are here to assist you. Stop by any of our associated dealerships today to learn more about these exceptional MDX models and to take them out on the road for a test drive.

*Prices shown are Acura suggested retail prices only and do not include taxes, license, or destination and handling charge. Destination & Handling charge is $950 for sedans and $975 for SUVs. Acura vehicle accessory costs, labor, and installation vary. Dealers set their own prices. Please consult your selected dealer.