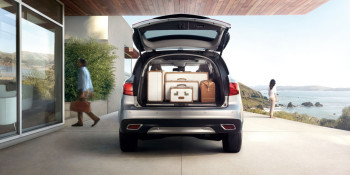 The 2016 Acura MDX interior space combines with its family-sized seating to offer one of the best seven-seater SUVs for Chicagoland drivers. These days most luxury crossovers have standard five-passenger seating, and any upgrade to seating just puts those extra spots in the cargo area, severely hampering room for backpacks, band instruments, and luggage that a family crossover requires.

The MDX is different, giving you a spacious cabin and room for up to seven passengers; let’s see how the competition stacks up.

Compare the MDX Interior to Other Luxury Crossovers

Most drivers already know that the MDX is one of the few luxury crossovers that offers a standard seven-passenger seating arrangement, but did you know that many of its competitors offer less in the way of cabin volume and seating? We want to share with you the 2016 Acura MDX interior space specs and those of some of its competitors:

To get an idea of how the Acura compares beyond its spacious interior and family-sized seating, see how its features and specs stack up to a competitor in our 2017 Audi Q7 review.

While the roomy cabin of the 2016 Acura MDX certainly gives it an advantage over competitors, it’s far from the only advantage for the vehicle.

While some of the competing models we looked at have similar features available, few of them offer Chicagoland drivers as much as the MDX does.

Now that you’ve seen the numbers, we want to show you how welcoming the 2016 Acura MDX interior space is in person. Visit a Chicagoland Acura Dealer near you today to get behind the wheel of Acura’s seven-passenger crossover and see it for yourself. With a wide range of packages available, we think it’s easy for Chicago-area families to find an MDX that fits their needs and budget.